A torch is an essential part of one’s camping kit list – more often than not, a campsite will have large areas where there is no lighting and so when it gets dark it can be virtually pitch black…

One might be forgiven for thinking that all torches are the same or at least similar… however, there are many different styles with many different functionalities and prices ranging from a few pounds to several hundred pounds.

In this article I will be looking at some of the best torches for camping and the essential features you’ll want your torch to have. 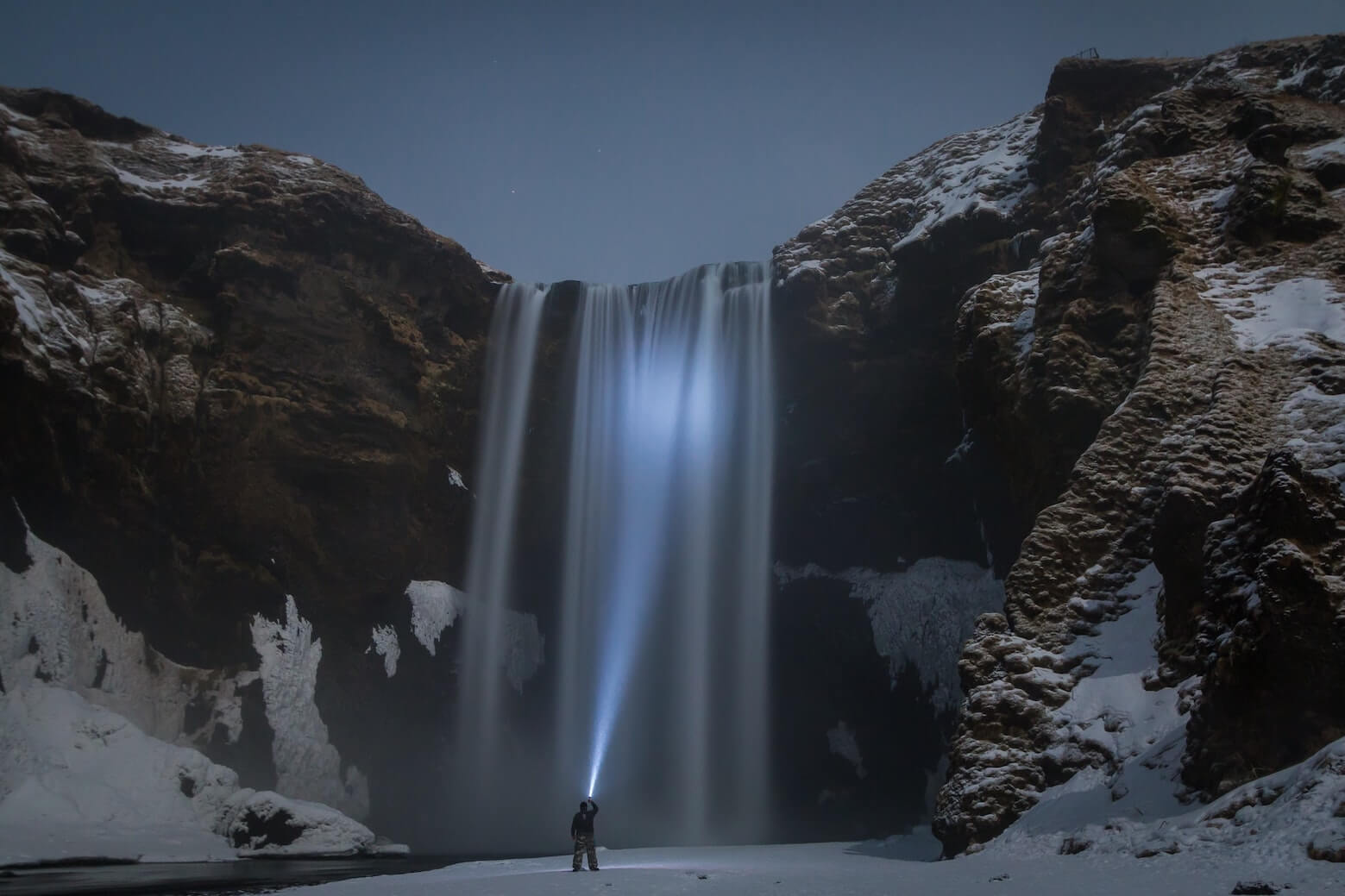 The majority of torches are powered by batteries.

These could be alkaline batteries and the type will largely depend on the size of the torch – large spotlights will often use D batteries, while smaller torches are more likely to use AA, AAA or even CR123A batteries.

In the majority of cases it would be possible to replace alkaline batteries with lithium batteries.

Lithium batteries perform better in cold weather compared to their alkaline counterparts and also hold their charge for longer.

It’s always advisable to take spare batteries on a trip – the last thing you would want is for your batteries to die and not have a replacement to use immediately.

There are a lot of torches on the market that are rechargeable – these are powered by lithium-ion batteries and can be recharged through the mains or in a car with the correct adapter.

I usually carry a spare rechargeable battery with me, that way if the battery does run out of charge while I still need to use the torch – I can swap the battery and put the original onto charge.

In my opinion, rechargeable batteries are the best option – especially with the availability of smaller and smaller portable power banks.

The light intensity or power output of a torch is measured in lumens and is a measure of the total quantity of visible light emitted by a source per unit of time – the higher the lumen the more ‘bright’ the torch is. 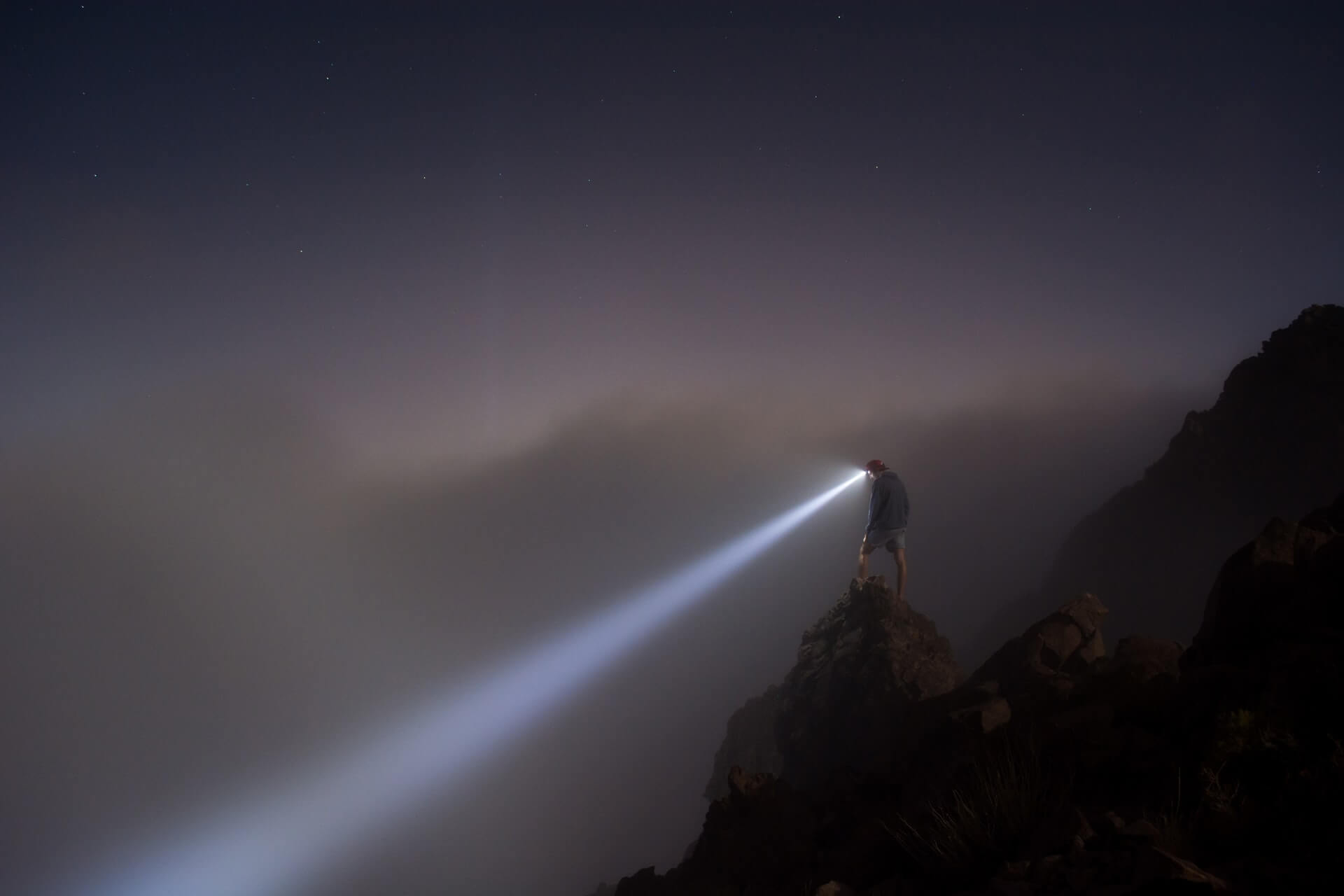 Torches vary from an output of a few lumens to some which give out several thousand lumens.

For most camping situations a luminosity of a few hundred lumens would be sufficient.

There are a variety of bulbs that are used in torches – offering a varying range of light intensity, range and colour.

Incandescent bulbs work by passing an electric current across a wire filament, which is protected from oxidation with a glass or fused quartz bulb that is filled with an inert gas such as argon and/or nitrogen – the temperature reached is so high that it causes the filament to glow and produce visible light.

The problem is that these bulbs are often fragile and inefficient in addition to producing heat.

They will also last less than 1,000 hours before the filament is worn out.

Halogen bulbs are similar to incandescent bulbs, but use halogen instead of argon/nitrogen.

These bulbs last a little longer as the halogen gas reacts with the tungsten filament and redeposits tungsten atoms back onto the filament, so that they can be reused.

Halogen bulbs can last up to 2,500 hours, they also run brighter and get hotter than their incandescent counterparts

They don’t produce much heat and have a general life expectancy of 50,000 hrs!

They can also be coloured, which can be useful in a torch.

LED lights are definitely the option to go for. 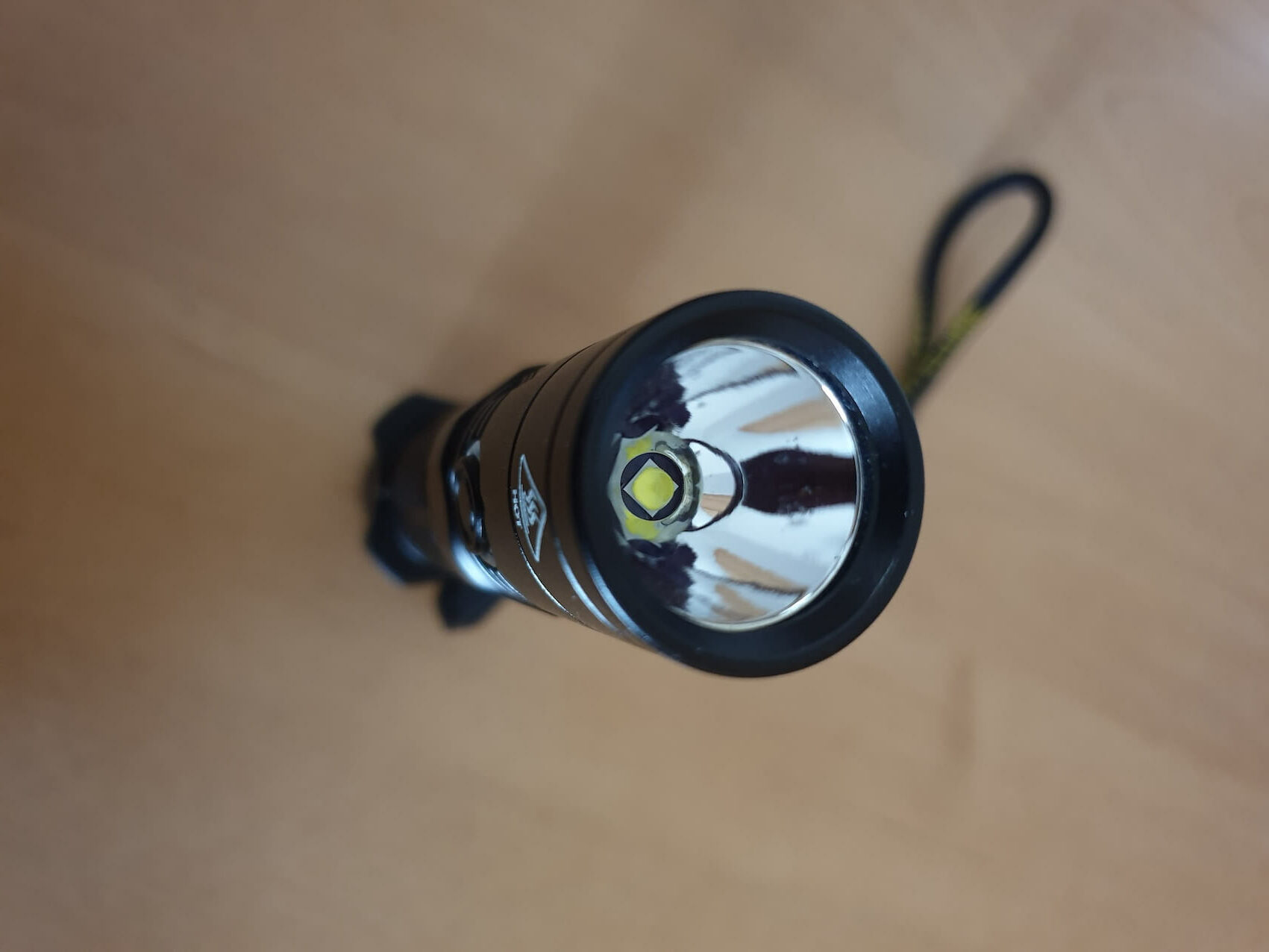 This is quite an important aspect of the torch that often gets overlooked – the light should have a good balance between throw and flood.

The range should be sufficient to light up what needs to be seen in the distance and equally it should be easy to see what’s in front of you.

Good quality torches will produce a wide, soft and balanced beam with a smooth transition area.

An ideal camping torch should be strong, durable, light and weather-proof.

Torches are typically made of metal or plastic.

Plastic ones are generally cheaper, but they may be more prone to damage – unless they are made of a tough, shock resistant material.

Metal ones could be made of steel (heavier), aluminium (lighter, but not as strong) or titanium (light and strong, but more expensive).

Many torches have the ability to change luminosity – for me this is an essential feature – you need to able to have a low luminosity setting for use in certain situations, for example around your own campsite where there are other people but also a higher luminosity if you’re walking through the woods by yourself.

Other modes include strobe or SOS and different colours (such as red to preserve night vision).

I’ve noticed that a lot of the premium torches have a moonlight mode (less than 3 lumens) instead of the red option – I prefer the moonlight option over the red filter as it is low enough to preserve night vision, but still allows you to see the true colours of your surroundings.

Considering that a torch will be used outdoors for the majority of the time – for it to be waterproof is an extremely useful option.

The level of waterproofness is shown by the IPX rating.

This is a useful feature to allow the torch to be clipped to a belt or backpack.

The power button should be easy to find and operate, even in the dark and even while wearing gloves.

Head torches are useful if you need to keep your hands free, but they can be a bit annoying if you’re in a group as the light can easily dazzle other people if you look towards them.

So which type should you go for?

That’s the difficult question – there are so many options out there and it really depends on your needs and budget… but remember, choosing a torch is an investment, that should last you for many years. 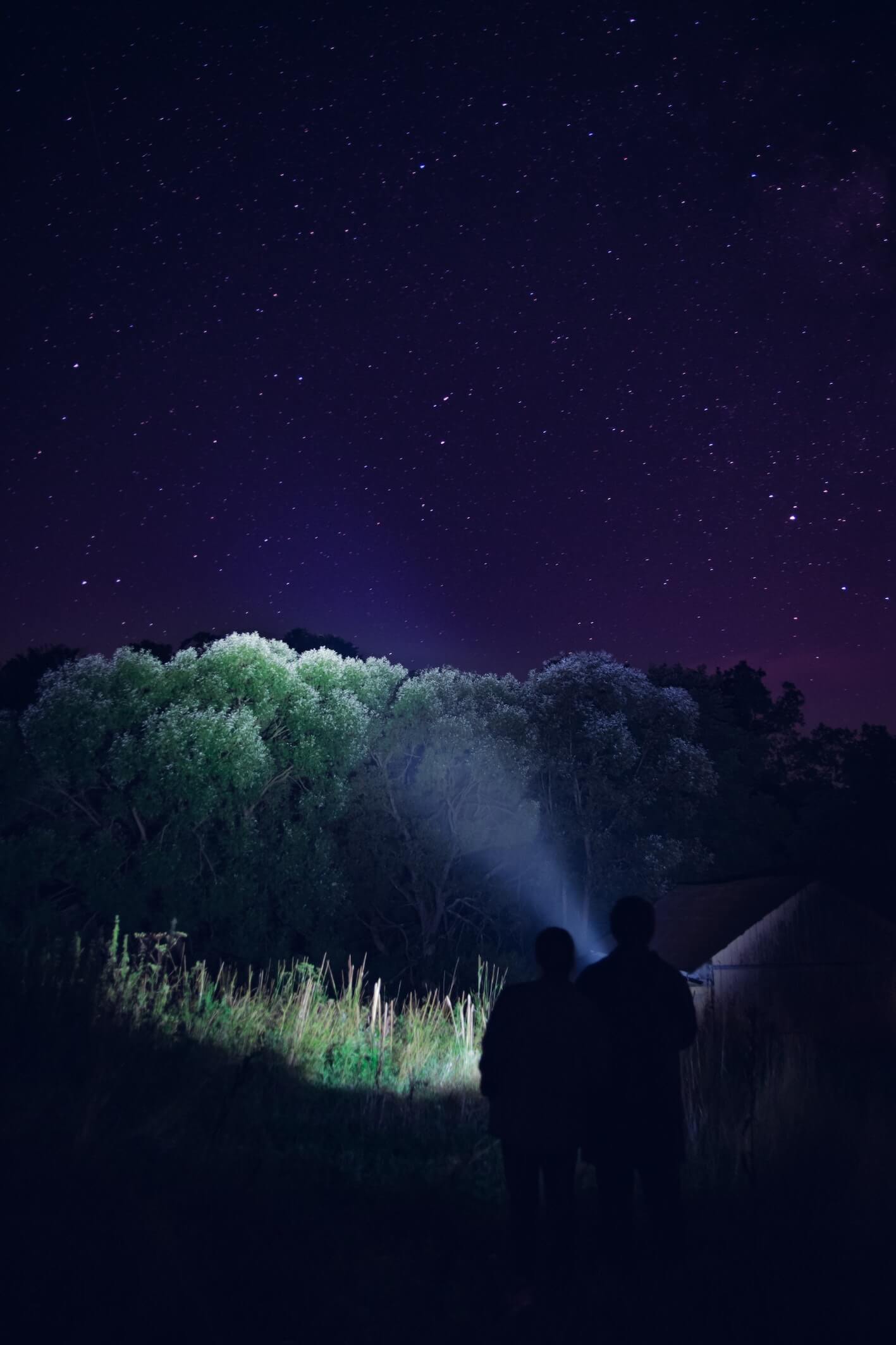 I’ve had quite a few hand torches and head torches over the years, but my favourite by far is the Olight H2R Nova – it’s an innovative and beautifully crafted torch that has many useful features and also doubles as a head torch, you can read my review of it here. 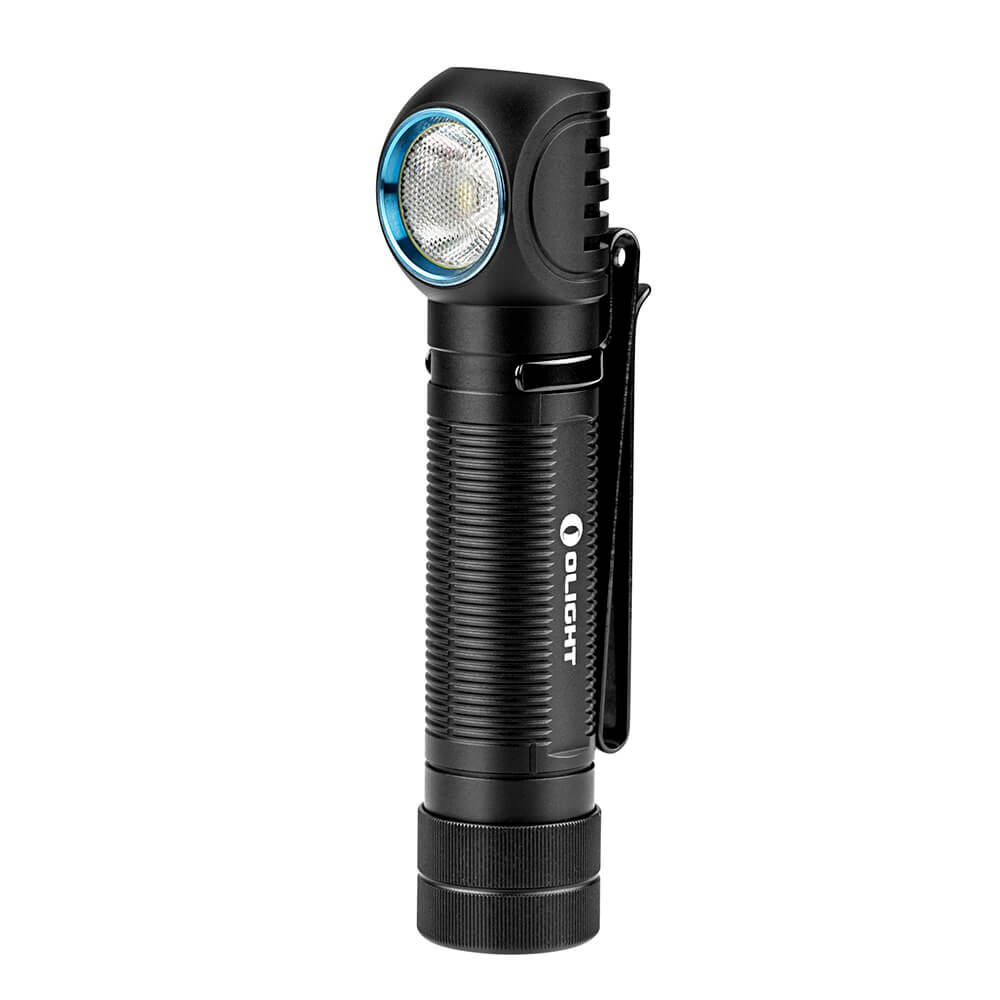 6 thoughts on “What To Look For In A Camping Torch”